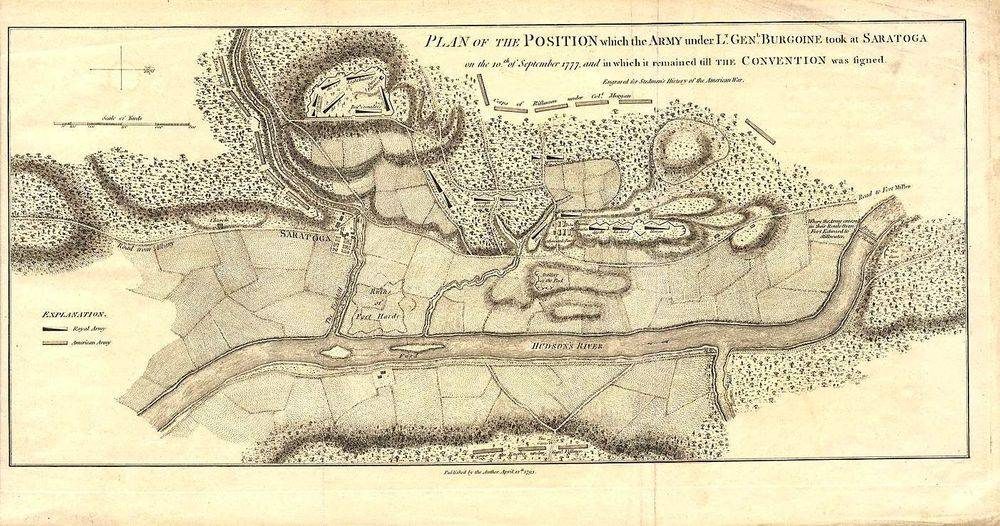 The Battles of Saratoga (September 19 and October 7, 1777) conclusively decided the fate of British General John Burgoyne’s army in the American War of Independence and are generally regarded as a turning point in the war. The battles were fought eighteen days apart on the same ground, 9 miles (14 km) south of Saratoga, New York.

Burgoyne’s campaign to divide New England from the southern colonies had started well, but slowed due to logistical problems. He won a small tactical victory over General Horatio Gates and the Continental Army in the September 19 Battle of Freeman’s Farm at the cost of significant casualties. His gains were erased when he again attacked the Americans in the October 7 Battle of Bemis Heights and the Americans captured a portion of the British defenses. Burgoyne was therefore compelled to retreat, and his army was surrounded by the much larger American force at Saratoga, forcing him to surrender on October 17, 1777.

A 155-foot rock-faced granite obelisk, completed in 1883, commemorates the Battles of Saratoga. It was restored and reopened in 2002 by the National Park Service.

Long a country home of the Schuyler family, the present house is the third to occupy this site. The first was destroyed during the French and Indian War in 1745; and the second was destroyed by British troops in October 1777, following the battles of Saratoga.

The nucleus of General Schuyler’s extensive agricultural and milling activities, the Schuyler House was visited by such dignitaries as George Washington, Alexander Hamilton, and the Marquis de Lafayette. It has been part of the Saratoga National Historical Park since 1950.

The site of the turning point of the American Revolutionary War, where British forces were defeated by the Americans during battles in September and October of 1777. Explore and enjoy the visitors’ center, museum, bookstore, hiking trails, and a 9-1/2 mile self-guided tour road.

Operated by the Department of Veterans Affairs National Cemetery, this site serves veterans from the Northeast. It is located north of Saratoga National Historical Park on Duell Road, off of Route 4.

East of the Old Champlain Canal on Ferry Street (Route 29) is the area known as the “river flats”. On this low-lying plateau, it is recorded that the British army stacked their arms on October 17, 1777. Also, the site of Fort Hardy, built by General Dieskau in 1755, now Fort Hardy Park.

A quiet, relaxing location to watch boats “locking through” on their journey up and down the Hudson River. See one of the few original locks on the old Champlain Canal, and visit the unique powerhouse that controlled the locks.

Located 2 miles north of Schuylerville, fortified by General Stark, it prevented a British retreat after the battle.

At the intersection of Broad and Spring St. were the barracks in which the spy Lovelass was tried and sentenced to be hanged.

British General John Burgoyne surrendered to American General Gates on October 17, 1777, just south of the General Schuyler House on Route 4. The American flag was the first to fly victorious over an enemy.

Sited north of Byron’s Market on Broad Street, where Burgoyne signed the “Articles of Convention” leading up to the surrender.

One mile north on Route 4, on an elevation to the left, sits the Marshall House. Now a private residence, this house is one of the few remaining structures in Schuylerville that dates back to the Revolutionary War.

A reproduction of a French and Indian blockhouse, built-in 1927, that served as the first visitors’ center for the Saratoga National Park. Presently located in the Village of Stillwater, it features rotating exhibits and special events.